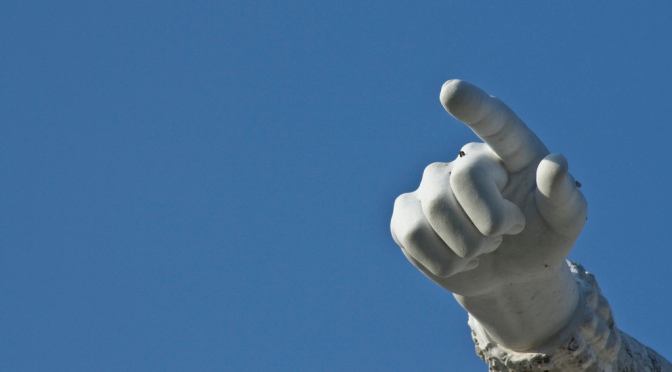 John the Baptizer pointed to Jesus the day after Christ’s baptism. He said, “Behold, the Lamb of God, who takes away the sin of the world.” (John 1:29-42) A finger directed their eyes toward the one whose arms would be outstretched on the cross. John announced his mission. He is the One, who gives himself for the world, and in his action, people’s sins are forgiven – they are healed from their deepest maladies.

The word that always comes to mind when I think of the work of Jesus is a Greek word: kenosis. It means to pour out. That’s what Jesus did for the world. He emptied himself for the sake of others. He poured himself out for those whom God loves.  Kensosis.

The church is the body of Christ. It is called into being and gathered as a community to be the body of Christ in the world. As the presence of Jesus for the neighborhood and those beyond, it is a kenotic community – a community of kenosis – called to be the presence of the Lamb of God whose life blood is given for others. The church is kenotic when it looks to the community and lives according to God’s purposes: when it pours itself out for the sake of others.

Sometimes, however, the church forgets its mission. Instead of basing its existence in Christ’s work for the world, it erroneously thinks it exists to provide benefit to its members.  Whenever the church is more concerned for those in the church than those around the church, it loses sight of its identity. An inward facing church stands in contradiction to the Lamb of God.  Rather than being the body of Christ for the sake of others, it becomes a club that focuses on preferences or privileges of the few. When this is the case, the church denies the very mission that is its lifeblood. It turns Jesus into a perk for the few, instead of the savior for the world.

What do the people of your neighborhood see when they point to your church? Do they readily see that yours is a congregation that is the kenotic presence of Jesus – a church that takes its calling to be the body of Christ seriously? Fingers pointing to your community, should be accompanied with words similar to those of John: Behold, the Lamb of God is present among us, the community of faith that brings life to the world. You are the embodiment of Jesus’ love, life, and forgiveness.

I am convinced that the current malaise of the Christian Church in western cultures is directly related to the church’s inability to remember the source and purpose of the church. We forget that the Holy Spirit calls us to be communities of faith that are both rooted in and shaped by the cross. We forget that Christ’s death and resurrection are the source of the church and the pattern for the way the church is to stand in the world. God’s action of new life through the cross gives the church its mission. It gives shape to what we are about. The Holy Spirit calls and gathers the church to be God’s kenotic presence sent into the world.

God’s kenotic church is rooted in a worship of thanksgiving for God’s new life through Jesus. It is a church actively engaged in the world in order to bring about God’s desired future: a future of life, a future where those things that stand in opposition to God’s way are brought to an end. It is a church that stands as Christ, looking beyond its own preferences and pouring itself out for the sake of others. God’s kenotic church creatively engages the community for the sake of bringing God’s new life to bear in real and tangible ways wherever the Holy Spirit has gathered that particular community of faith.

What does your community of faith do to be the kenotic presence of Jesus for the sake of the world? How does the work of your church bring new life, the forgiveness of sin, and healing to the community around you? These are questions all Christian leaders should be asking.  They keep us pointed toward God’s mission, lest we become absorbed with ourselves. They keep us pointed toward the world.

I’d love to hear how your church is living its mission in kenotic ways. You can post your thoughts in the comments of this blog. I’ll read them.

The above photo is entitled “Point.” It is by photographer Sarah G and is used according to its Creative Commons (CC BY 2.0) license.

My Most Recent Posts:

God calls us to trust God's future. Jacob did it at the Jabbok. Jesus did it in the grave. What will the church do?

Add Jabbok’s Edge to your e-reader

An ELCA Congregation in Waukesha, Wisconsin

An iPhone Pastor for a Typewriter Church

God calls us to trust God's future. Jacob did it at the Jabbok. Jesus did it in the grave. What will the church do?

The photography of Alex Baker

Christ Crucified in a Crazy World